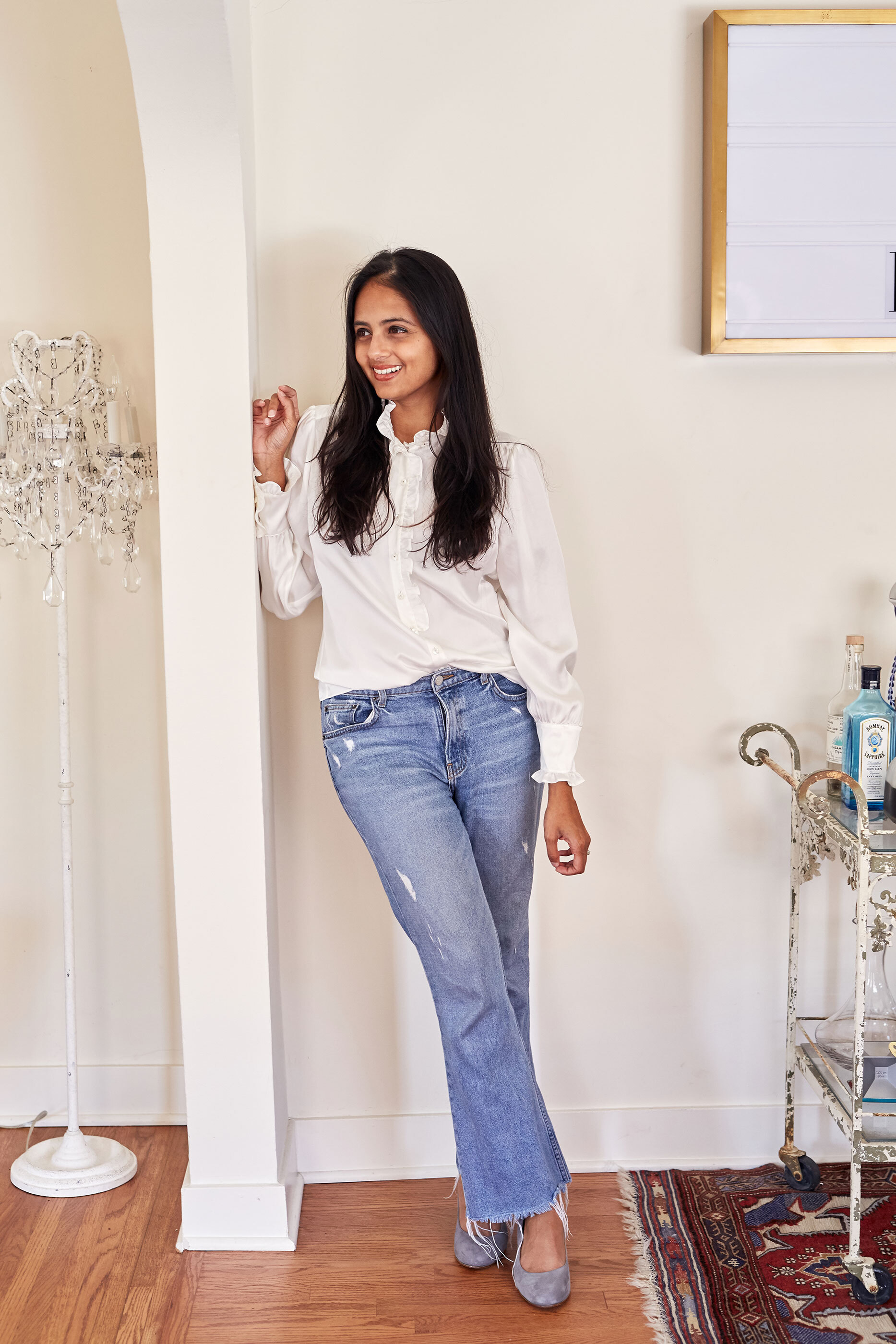 If olive oil has an it-girl, it's surely Aishwarya Iyer. The LA-based entrepreneur spent time working at startups in New York City before a new relationship—and the nesting that accompanies it—cast a spotlight on the not-so-savory parts of olive oil production. She took a thoughtful approach, investigating the problem and how it connected to her personally before deciding to dive in and launch Brightland.

Like most grocery store staples, olive oil had been an item most people purchased when the old bottle was out and reached for without giving a thought to style. Aishwarya set out to change that with Brightland, both with the way it's made—olives are hand-sourced from a single California farm—and the bright, modern packaging that sings out to consumers. Each variety has accompanying tasting notes more akin to what you expect with wines and information not normally seen in the category (like the types of olives used).

We chatted with Aishwarya about how she ultimately decided to pursue the idea, the need to unplug and disconnect, and how difficult reining in your inner critic can be.

The idea of "disruption" is talked about so much with startups, but that's not something you relate to. Can you speak about how the genesis of Brightland was different?

I approached it in more of a problem/solution way. I was living in New York and in a new relationship, so my partner and I were spending a lot of time cooking together. We both kept getting these stomachaches and thought it might be bread, cheese, spices...we kept eliminating things, trying to figure out [what it was.] Eventually we realized olive oil was the culprit. When I Googled it I realized a lot of the olive oil Americans consume is adulterated and there's fraud within the industry. That led me to think about the category as a whole and how we really don't know what we're consuming. Plus, people feel like they don't have an olive oil brand they're super excited about—that's how I got to that, "Maybe there's something here..." moment.

I discovered that in 2015, but took a step back. I didn't want to do anything inspired by disruption, like, "I found this category that's ripe to attack and I'm going to after it." I wanted it to mean something and be personal to me. I didn't know if I was the right person to go on this journey and build it, so I went on living life.

A year later I learned that my ancestors in South India owned land and were salt farmers in the 1800s. Learning that I had this connection with the land and food in such a deep-rooted way was what I needed to hear to bridge where I came from and where I could go. That and some coaching about what it means to have an inner critic set me on the journey. I spent 2017 working on the company and we launched in 2018.

What were some of the most valuable lessons you learned when addressing your inner critic?

It’s about naming it, calling it out, and understanding that it’s your inner critic trying to prevent you from doing something. Sometimes that’s rooted in fear—in a human, very primal way we avoid fear because we don’t want to die. That feeling that would show up when you’re at the end of a cliff and thinking about jumping or not, the rocks sliding at your feet, is the same as when you’re about to do something terrifying in your life, whether a career change or asking for a promotion or starting something new or being a bigger, bolder version of yourself. That fear kicks in and manifests as an inner critic.

To be able to call that out and say, "I know what you’re doing here" and take a step back [is important.] The fear wants to protect you, but you don’t need protection from something that's going to push you forward. Hopefully you’re not going to die from asking for a promotion or starting something new.

Prior to starting Brightland, a lot of your work was spent at startups. What were some of the most important lessons you took away?

How to be nimble, do more with less, and be comfortable with uncomfortable moments and the unknown. People have a fear of the unknown and want to feel safe, but in most startups—or early stage companies that are scaling and growing—there’s a lot of uncertainty and uncharted territory. Being able to boldly navigate that has proved to be so instrumental as I build Brightland.

[Those things are all] like hitting a tennis ball that just keeps coming at you—you can't take a step back and freak out. The more you do it, the more the muscle gets stronger and more refined and you become better at it. I lost it for a bit because I got comfortable and had to retrain myself quickly.

As a founder, work can easily become 24/7. How do you think about finding and maintaining a balance?

It's a work in progress, but part of the reason I started Brightland was wanting everyone to take a step back and be a bit more analog, whether that’s making a simple, nourishing meal and not looking at your phone, or posting [a picture to Instagram] but then sitting down and eating it without looking at the screen again.

I have a complicated relationship with screens and what social media does to us and how it’s reprogramming our attention and perception of reality. Taking time away from it is something I’m working on. When I do take that time away, it deeply re-energizes me. I think generally everyone’s spending way too much time on their phones looking at other people’s lives. I'd love for all of us to take a step back and be excited to live our lives in those day-to-day moments.

The way people approach work relationships in New York and LA is very different. On the East Coast, it was very centered around getting drinks or gathering after work, and there was a sense of pride in how late you worked. Here, people don't necessarily want to be out and about after work as much; it’s more of a breakfast culture.

What's one of your favorite ways to use olive oil?

Oh, I have an amazing snack! Take a hard cheese like a Pecorino Romano, drizzle some Brightland on top, get some simple French bread that you tear apart, maybe some really wonderful natural wine...that in and of itself is the most decadent, lovely afterwork snack. You can even grab those ingredients and bring them to the office to break bread and spend time with your colleagues.

A girl on the gaux is someone who's forward thinking and leaning forward. She's seeking inspiration from the world around her and puts that together to create something really special.