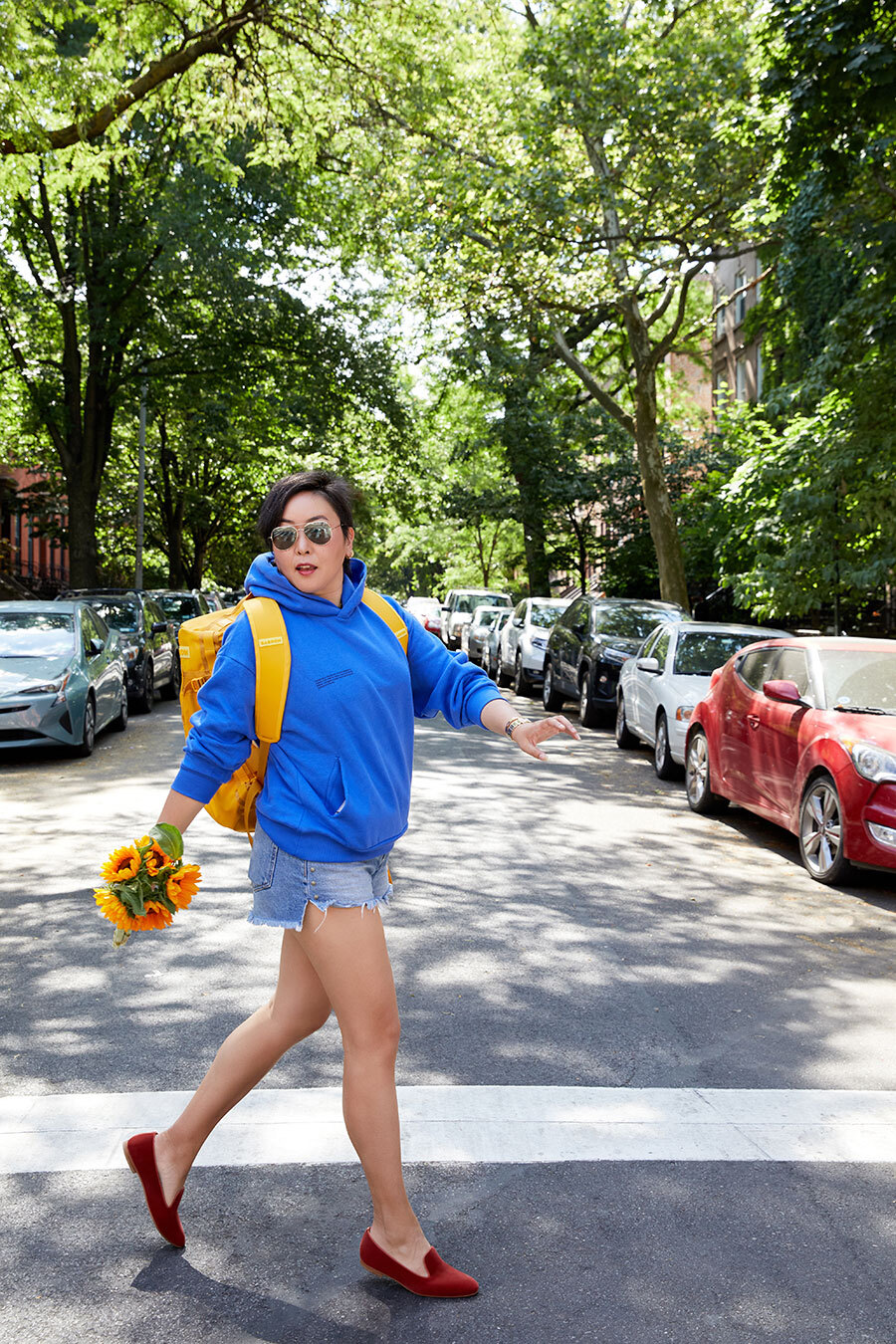 When taking in a fashion story or a magazine cover, you see the words, the model or celebrity lending their face, the clothing, and the accessories, but there's so much unseen that goes into stitching it all together. The magic rests in the hands of a talented editor who guides the narrative, both visually and verbally, to its ultimate destination. It's a job that requires a stellar eye, industry experience, and good instincts: All qualities Aya Kanai has in spades.

Aya spent nearly a decade climbing the editorial ranks, moving from Fashion Director at Cosmopolitan to Hearst's Chief Fashion Director where she oversaw a slew of storied titles. And at the start of 2020 she took on her biggest professional role yet, as Editor-in-Chief of Marie Claire. Throughout each stage of her career she's had a hand in creating arresting cover images, styling celebrities, and building out the trend stories that inspired how the rest of us shopped for a season. (In fact, she's such a fashion editor that she styled two different looks for her Gaux Girl shoot, wanting to show how The Loafer in Sienna Velvet works for weekend and a more buttoned-up occasion.)

Yes—her career has been made up of dream job after dream job, yet despite it all Aya remains refreshingly honest when speaking about the imposter syndrome that can still plague her or the ways in which she taps into her network for advice and feedback.

"When you create friendships and relationships in the workplace, you're drawn to that person because of specific characteristics," says our newest Gaux Girl. "It's important because [this is] a challenging business to navigate."

We chatted about the importance of helping eachother out, where her confidence comes from, and how her work life changed after having her daughter two years ago.

Working at a fashion magazine often means most of your colleagues are women. Have you developed any "work wives" throughout your career? How has mentoring affected your trajectory?

There’s this idea of mentorship which is so weirdly trendy right now, which is a funny thing to say. We’re all a little bit lost, and the idea that there would be someone in your life to show you the way is a very appealing concept. My "work wives" have often been more influential than my “mentors” because the work wives have been people—P.S., who aren’t always women—who are in the trenches with you and really see you. That’s what I’d consider a work wife. They're people who have a 360-degree understanding of the situation that I'm asking for advice about—what are the circumstances, what's possible, and what's not.

Certainly my Hearst career and becoming an editor-in-chief of a brand has created a built-in network of work wives because all the other EICs at our company are going through a lot of the same challenges. I'll often find myself talking to Liz Plosser [at Women's Health] or Jess Pels [at Cosmo]: "Hey, I have this situation, have you ever experienced that?" I find it to be extremely helpful.

You're known for being so generous with your advice. Why do you think it's so vital that we all help each other?

If someone is approaching me with an intelligent, well thought-out point of view about whatever situation they have going on and thinks I have something worth inputting, then I'm always happy to help. Listening and helping someone work through a problem often has a run-off effect of helping both parties work through something. In the workplace a lot of problems come up that are quite similar, so helping someone helps everyone.

Can you share how your work balance changed after having your daughter?

I think one of the interesting things about my workplace and others is that asynchronous communications, like Slack and other chat services, has become so pervasive and a really helpful thing for parents, frankly. We've been in a work-from-home environment for four months, and I only started my job as editor-in-chief in January, so I've basically almost done the whole thing as a work-from-home employee, which has been extremely challenging but has taught me a lot about how to communicate efficiently when you can’t just walk over and talk to someone.

Because my bedroom is my office now, I have to be way more clear about what is the beginning and ending of the day. Becoming a parent in 2018, I definitely learned it when I want back to work and had to find a way to make those boundaries really clear. Then I had to learn it again when I became a working-from-home EIC because having a toddler  bouncing around the house like a ping pong ball is really challenging when you’re also trying to lead a Zoom call or in a client meeting.

Your mother was also in fashion media—do you think that made you more or less confident as your career progressed?

Goodness, probably both. When I was a younger person I didn’t mention it very often because I wouldn’t want to be perceived as "that’s why I'm here" kind of thing. Then as an older person, I’m like "It doesn’t matter. I’ve been in this job for 20 years; I was supposed to be here. If I wasn't, I wouldn't be."

My mother is a person who gives really great advice, and because she also happens to be aware of the industry, she's able to really speak from a place of knowing. At the same time, the business has changed so much that there are definitely instances when I'll be explaining the situation to her and she won't have heard of what I'm talking about. But she is a good and thoughtful person, so she'll give me great advice regardless of whether she knows about that exact experience or not.

Regarding confidence, I know that a lot of mine comes from having really amazing parents who believed in me and, no matter what field I was going into, were really excited and supportive as long as I was putting in my best effort. My mom was definitely surprised when I ended up going into the fashion world because I don’t think she or I or my father or brother expected that, but sometimes these things just happen.

How are you thinking about instilling confidence in your daughter?

My husband is like a saint. When our kid starts talking it’s nonstop, and she’s always asking questions. He'll give her very complete answers even though we both know a lot of the words and stuff he’s using to explain it [won't mean anything to her.] Her question could be like "What's over there?" and the answer could be the sun or trees, but he'll say, "Over there is the Brooklyn Navy Yard. This is what happens there, and there's the pier." He explains completely what she's looking at, and I was saying to him that I think to be able to have adults in your life who take you seriously is so important. Even though she's two and a half, she knows when she's talking to her dad that he's talking to her like a person and they've having a conversation. I hope that's something that gives her confidence, and that she knows to demand to be respected by the men in her life, to demand to be taken seriously. I think that's the beginning of how you create confidence and hope what she'll remember is the feeling she was listened to and taken seriously.

As you've moved up and up the masthead, did you ever feel any sort of imposter syndrome? If so, how did you combat those feelings?

I’m at a point in my career where I’ve been here a long time but also know I have a long road ahead of me. I'll have to be working for at least 20 more years, so I want to constantly be challenged. And yes, I feel the imposter syndrome. I feel it every single day, especially because as an EIC you're constantly being asked your opinion about certain areas that might not be your area of expertise. For instance, in the fashion space I'm confident about my opinion, but I'm also covering features and beauty and lifestyle. We're making a crossword puzzle—and I'm not an expert in that! We're throwing events and doing a big, robust video series...a lot of the stuff I'm doing is stuff I've never done before. If I spent time really [giving in to] imposter syndrome every day I'd be paralyzed. I just have to shut it down because I need to be able to move fast and make decisions quickly. If I walk into a new situation and ask all the dumb questions, that’s fine too.

I’ve been in this business for a long time and have worked with a ton of different editors, so I'm used to judging how people have done this job. Now that I'm the person doing the job I wish I could tell previous me to just lay off because this job is really hard. Whenever you're in a position like this it's completely natural for the people on your team and outsiders to judge the validity of the role, but when you're the one doing it it's so insane. Every day is an avalanche of stuff going on, and I feel a lot of gratitude that I'm able to be in a job that allows me to be interested in what I'm doing every day. It's not boring at all.

How do you think the fashion industry has handled the recent cries for more diversity and better representation?

I cant speak for the entire fashion industry, but from what I’ve seen brands and media platforms have completely acknowledged the need to do better. What will come now is the evidence of that doing better. Everyone has now said it, they’ve admitted that systemic racism exists and that it’s time we’re going to do something about it. I’m certainly very glad that we’re living in a moment where that acknowledgment is able to be said out loud. What will be interesting to see in the next year is what’s the real-life outcome.

Becoming a mother really changes how you experience time, especially because you’re watching a tiny little infant grow and change almost every day. I feel like I turn around and look at her and think, "Wow, you grew just this minute." That for me right now is what it means: that I’m a person who is changing a tiny toddler who is definitely a girl on the go.

The reason I picked The Loafer [for this shoot] is basically because I don’t wear heels anymore. When I’m chasing a toddler I don’t want to be in a shoe that’s uncomfortable, and my little girl on the go is very fast, so I need to be equally fast to keep up with her. That’s such a pleasure of being a parent—chasing your kid and watching her evolve.

THE LOAFER IN SIENNA VELVET