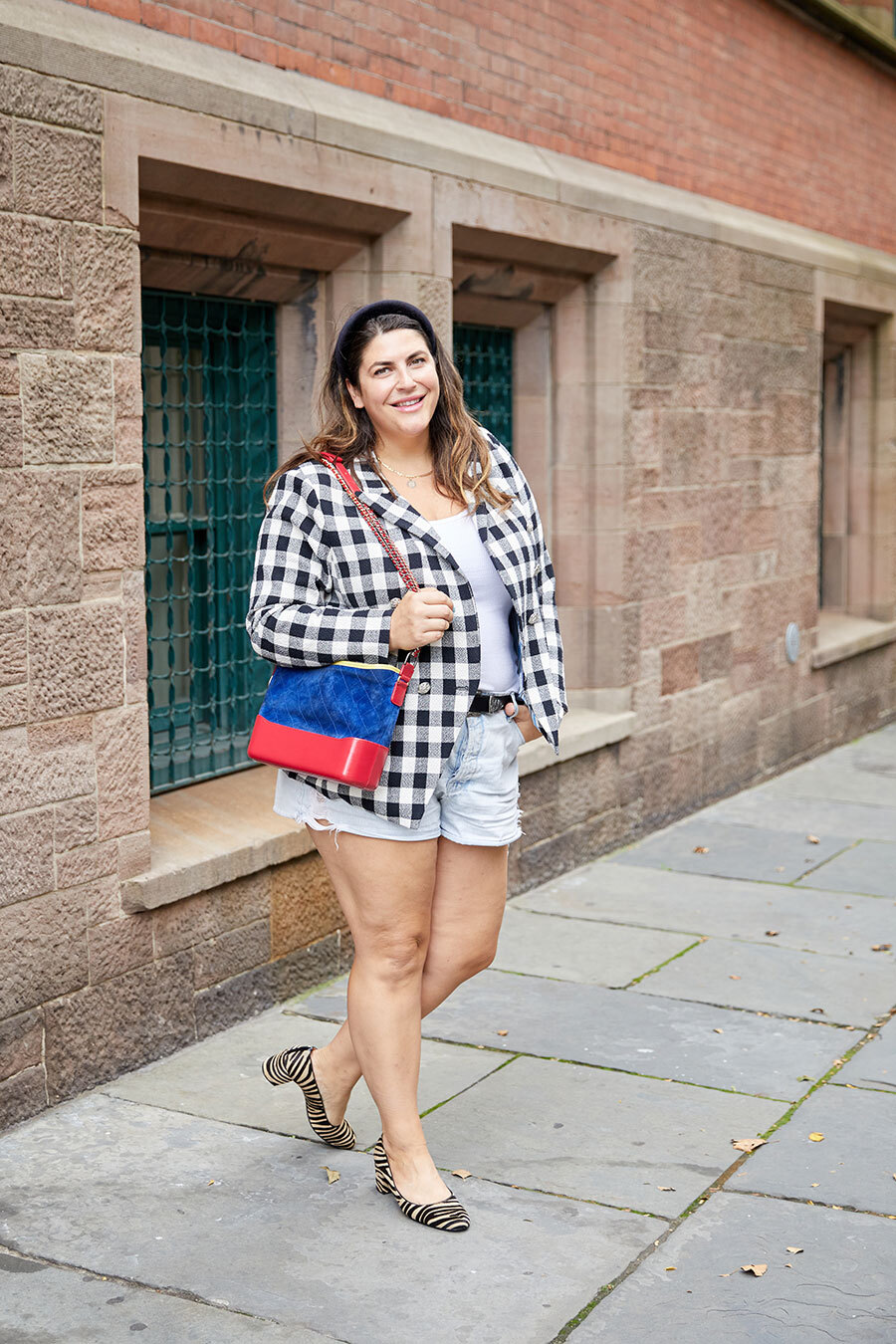 While our Gaux Girls are always multifaceted, juggling careers, companies, and causes alongside busy personal lives, Katie Sturino is a multihyphenate nonpareil. She's the founder of cultish personal care brand Megababe, a style blogger, and a self-described "momager" for her rescue pups (all Instagram stars in their own right). Beyond the professional accomplishments, she's also well-known in the industry as someone who's unfailingly warm and genuine. In short, she's exactly the sort of woman we love featuring as a Gaux Girl.

That Katie's career would involve so many fashion moments (like her #supersizethelook series, something she gets candid about in our chat below) is hardly a surprise: She started her career in the high-fashion PR trenches, with stints at Chanel and Dolce & Gabbana before striking out on her own. Later, her first foray onto the other side of the headlines came when she started dressing her pup Toast up in red carpet-inspired looks (fashion campaigns followed). The rest, of course, is much-liked and commented-upon history.

Her family of dogs (including the much-loved and recently departed Muppet) occupy the handle @dogmeetsworld, while Katie's blog The 12ish Style lives at @katiesturino. And while Megababe isn't an Insta-product—you can grab it on physical shelves at massive retailers like Target and Ulta—it is a brand that seems ready-made for the social space with its colorful branding and peppy attitude.

Read on for our chat for Katie's lessons on Instagram stardom, why "who wore it best?" isn't welcome on her feed, and what she'd advise anyone looking to build a platform.

Megababe started as a way to find solutions for personal problems—and has exploded! What has it felt like to see your products at places like Ulta and Target?

It's very satisfying to discover that you were right about something, to feel like, 'Wow, I was right!" It’s a real lesson in the discipline in celebrating joy because it's really easy to get some success and then immediately feel like you’re not doing enough. It’s important for us to make sure we’re taking stock of where we are and where we’ve been. I still go into Ulta and scream. It’s exciting! I go back to those original, one-on-one moments when you're talking to a real woman who's like, "I wear shorts because of you! I changed my whole summer wardrobe because of you. I went for a walk on the beach: You freed me to do this." I won't stop until any woman anywhere is within 5 minutes of a Megababe stick—the Thigh Rescue—because I really feel like if you forget it and you’re chafing and out for the day, it’ll ruin your whole day.

When first starting we had to talk to a lot of men because [they headed up the] factories or bottling companies. We had to pitch it so they understood it’s a real thing—which they didn’t. Since then they recognize it as a real business. Every week we'll run into someone in a professional setting that can’t understand what we’re doing. Whether that’s a retailer or a writer, there’s always someone who’s like what? or who thinks it’s silly. A lot of people think it’s silly, and that’s fine—I don’t ever want to take ourselves too seriously, but it’s funny that it’s a smirk problem, when everything else is taken seriously. Sometimes we’ll look at people who have the problem, and they’re like, "Oh, I just deal with it." Why would you when there's a better option??

Along with being a founder, you're an influencer and a "dogager" to some canines with impressive followings. What has being on both sides of the influencer game taught you about work and branding yourself?

Being a dogager, I learned to find your messaging and stick with it because people have a lot of information to absorb and feel like they don't have time to download different messages from you. They just need to know, "What are you, what is this?" That's one thing I try to do: just hammer home on one consistent message constantly.

The thing I loved about being a dogager was that the focus was off me. I didn’t have to be dressed. I had to do the work and it was work. That's another thing: It's certainly not construction, you're not lifting and moving things with your hands, but it is work, it's not a hobby. The thing that crosses over for me and why I can't separate my personal account from my work is that I work with my sister and my best friend and they take on a lot of things so I get to stay in the fun role of talking to customers and product development—the creative part of it. That's why [the Megababe feed] all crosses over with my own feed.

On your @Katiesturino handle you do an amazing feature called #supersizethelook where you recreate celebrity style moments. Where did that idea come from? And do the shoots take a lot of prep and planning or is it pretty quick?

They come together pretty slowly. I can't just get a dress from wherever the celeb got it from, so the biggest challenge is finding a dupe—that's really hard. We usually end up pulling 17 or 20 looks to start and end up shooting two of them. We go and look and this isn't the right color, that's not the right shape—it's hard to pull it together. People will ask if I buy all the stuff. I don't buy the clothes, I usually have them loaned by brands.

The idea came from the fact that when I started out as a blogger I didn't understand you have to come up with seven outfits a week. I was like, "Oh, what? I thought once in awhile I could hop on here and tell you about my jeans!" I started to look at celebrities for inspiration, what I should be wearing and how I should be styling it, and I found so many women would respond and say, "Oh, I didn't know you could wear this!" I just wanted to show women of every size that they can pull off the look they see on Hailey Beiber.

It's refreshing to see how you'll caption those posts with a note how it's not about "who wore it best."

I just started saying that a couple months ago because people were like, "You wore it better, she needs to eat a sandwich!" and I was like, "No, this isn’t what this is! You don’t attack her body for not being what you think it should be either." It was a reaction to people's comments. The whole concept of "who wore it better?" is fun, but one of those little micro things that women deal with, something that keeps subtly messaging that small is best, that kind of thing.

That's just one of the examples of how you've used your platform and company to really support causes you are passionate about. Do you have any advice for people who might care deeply about an issue, but aren't sure about how to make it more of a thing?

I think the thing is that people just want to know what to do—if you care about something, the chances of other people caring about it is big. You can become the person who tells people what’s going on, update them, tell them what they can do to make themselves feel like they’re active as well. That’s what I would do. Just become the expert in that area. People with platforms and causes are always looking for more platforms to share their messaging on, so even if you start with 700 followers, you never know [what could develop]. Consistency is key.

And by the way, I've started 10 failed Instagram accounts where I’m like, "This is it, this is great!", and then I just don't do it. It’s mostly been because of steam and energy, but pivoting is also really important.

You've been such a wonderful friend of the brand's. Do you remember your first pair of Margauxs?

My first pair weren’t the ballet flats, it was The Heel in Cacao. The thing is I have a wide foot, a size 12 wide foot, and finding beautiful, not-cheap shoes is so hard. I wear Margaux for everything.

It's an example of a company that launched something that already existed, but they’re doing it in a way that feels special and they’re successful. That's a good message because people always think that when something's out there you can't do it again, but sometimes you can do it better.

Being a girl on the gaux means you’re never satisfied, you’re always pushing—whether that means pushing yourself to do better or others to do better. You’re on the go, but there’s a reason you’re on the go: Because you’re trying to do something.