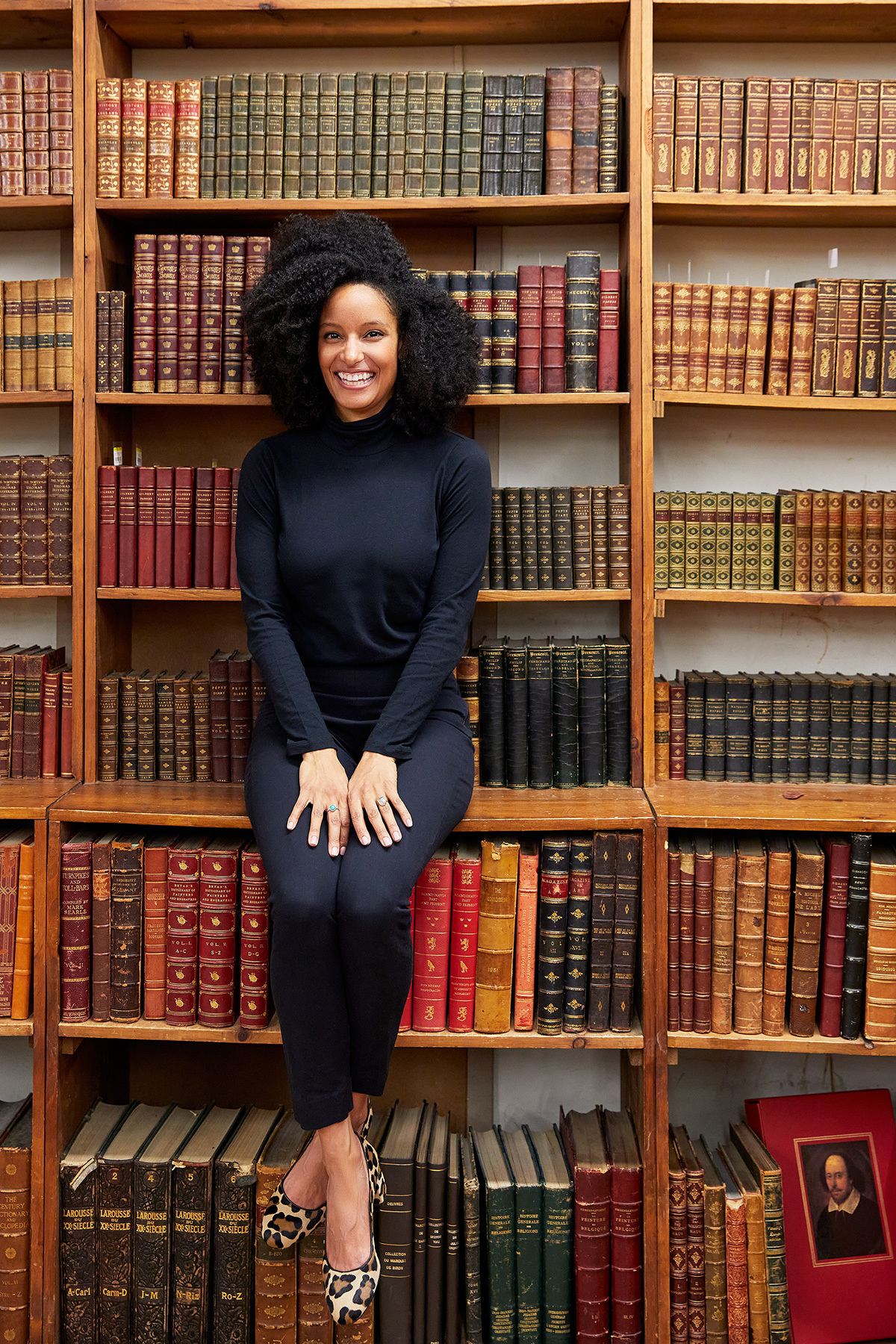 Writers are born and made, with all the assorted experiences they go through contributing to the work they turn out. Our latest Gaux Girl, author Kiley Reid, spent time as a nanny before publishing her first novel, Such a Fun Age, and the relationship between a family and the caretaker it welcomes into the fold was where she knew she wanted to start. (Don't go looking for a thinly veiled autobiography though; Kiley and protagonist Emira are different people).

Prior to publishing her book this December, Kiley was a student—and teacher—of her craft. She benefited from the power of community while workshopping her novel at the Iowa Writers’ Workshop and then helped others learn to love the page while teaching at the University of Iowa. The buzzy success of Such a Fun Age has also provided plenty more opportunities for her to continue learning: The title was optioned by Lena Waithe's production company, and Kiley is involved in adapting it for the screen.

Our shoot day with Kiley was capped off with a night of conversation we co-hosted with Marie Claire. She chatted process and story arc with Executive Editor Sally Holmes before opening up the floor to audience questions. Beyond sharing fascinating tidbits from her personal history (like time spent as a magician's assistant), she tackled questions about liking unlikable characters and how it felt to experience open racism while promoting her book.

Here, our conversation about working, writing, and finding lessons in the most unexpected places.

Your path to being an author wasn't a straight shot. What were some of the best lessons you learned from the jobs you held along the way?

I worked at a craft studio on 92nd and 2nd in New York for [about] four years, and we did children's birthday parties eight or seven times a week. Not only was it a really good lesson in multitasking and pushing through when a bunch of 3-year-olds are staring at you, not sure why they're there, but also a big lesson in working as a team. There were so many times when I felt really touched by the women I worked with. I would be talking and if a baby started crying, they'd dive in to make sure I could shine. Everyone looks great when their strengths are highlighted, and I try to put that into my characters.

You've worked with children throughout your career. What are some of the best lessons you've learned from them?

It's impossible to work with children and not learn about patience and the importance of repetition. As a writer it's trusting whatever brings your hand back to the page, even when you really don't feel like it. Children teach us about the benefit of repetition when you're learning something and how it can become a muscle.

They're a really good lesson in comedic timing and humor as well, about how the funniest things are often the most obvious and true. Kids teach you how honesty can be really funny or biting or sometimes both.

With Such a Fun Age, did the story or characters come first? Did you know the story you wanted to tell from the beginning?

A little bit of both. I started with character since Such a Fun Age starts with the relationship between mother, daughter, and babysitter. I didn't know who they were at first, but I wanted that relationship since it's so ripe for opportunity in terms of ownership and the history of domestic work and slavery in this country. I wanted that in a modern take.

For me, stories are very heavily plotted, and it's a process. One day a character's tendencies may reveal themselves to you, then you see how another responds and if it works with the cast of characters you have so far.

When I wrote this book I was also applying for grad school, so some days I'd dedicate fully to the novel and others to my applications, and there were breaks in between. This is my first, but I have a feeling that with every book the seasons of your novel are different. I'm not sure what will happen with number two, but it took me awhile to come to a plot [with this one.]

As a writer, you have to get comfortable with editing yourself and deleting whole sections you'd worked on. Do you think that affects you outside of the work?

That’s an interesting question! I'm quick to change things in my writing as I see how a story can benefit from it, but I don't think that makes me a very flexible person in the real world.

Even when I was plotting [the novel] out with a list of everything that would happen, I started to understand that if everything was going according to my list I wasn't really listening to the characters. It's impossible to know exactly what's going to happen seven chapters from now. This event might happen in a different room or this character reveals a secret. I think flexibility is a wonderful trait, but at the same time, as a writer, it's a really tricky balance between trusting your gut and listening to the story even when it wants to do something you hadn't planned on.

At our book club event you said you surprised yourself by never landing on a moment of "this is it!" regarding the book. What finally inspired you to take the leap and submit the final draft?

Toward the end it was just a lot of days of reading it over and over and over again. I think a lot of writers can relate to the moment when you're too close to the material, and it's hard to see what's lacking and what's really working. At that point I'd probably had 20 people read the manuscript, so I knew it was a complete thing, but not as tight as I wanted it to be. That admittance freed me up to be really honest with editors and agents and find someone who saw the same areas I wanted to tweak and fix them together.

I've watched so much of my writing get better because of feedback from other people. At that point I had done a year of grad school and seen how my work changed from workshop, so I was eager to get it into other hands. The novel was mostly complete, but the littlest thing could make a huge difference.

What have been some of the most special responses you've gotten from readers?

It’s been really wonderful to hear black women at readings say this is the first time they've heard themselves and their friends in a novel. Comments like that can take you back to what art can do and how nice it is to see yourself in a piece of art.

It's also been wonderful to hear that people can do two things with the novel: understand the satirical element and get lost in the plot-driven story. I was concerned those two things wouldn't work together, but I think they do.

You've also had to deal with some trolls. How do you handle that negativity?

It’s difficult to hear comments that are driven by the way I look or the color of my skin and never easy to know that there are people who will never pick up my book because of it—and the reasoning for DM'ing or tweeting at me to tell me that is beyond me. The platform I have as a writer and to get turned down in that way is still a huge privilege. Focusing on that really takes away from the trolls.

How do you use fashion to tell part of a story or divulge something about a character?

I absolutely love using cultural references from fashion to craft my characters and [to show] who they are as a person by the things they love to own, like little magical items they really hold dear to themselves. Fashion can serve as a time capsule a little bit, and within trends you see class and money. Sometimes pain can be held in a pair of earrings that someone loses.

A girl on the gaux is going in service of others. She has a “not me, us” mentality.

Shop all six colors of The Heel here.