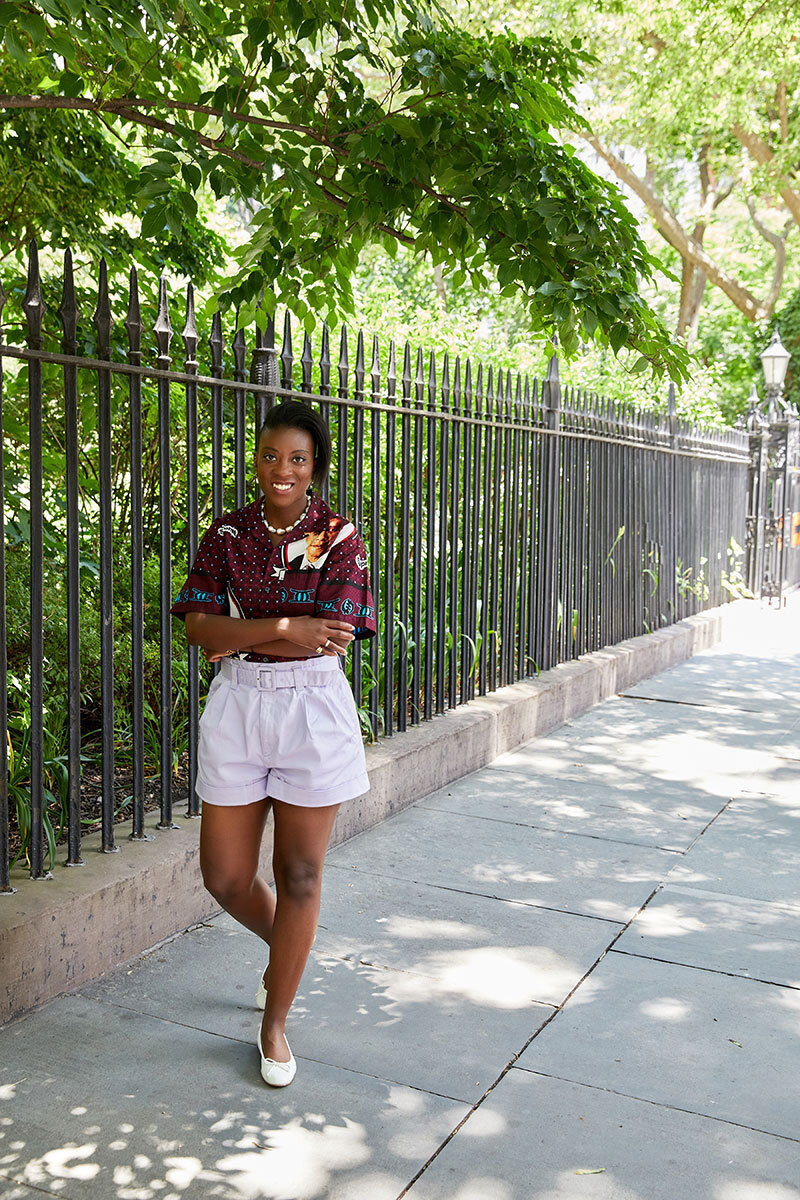 Fashion and style are close cousins, often confused but decidedly distinct. And one only needs to clock the recent career moves of Gaux Girl Nikki Ogunnaike for an illustration of how the two differ. After a decade covering women's fashion, steadily moving up the masthead at titles like ELLE and Glamour, she took on her most senior role yet as the Deputy Fashion Director at GQ, a menswear title on the opposite side of media's Venn diagram. Her move across the aisle is a reminder that style is about personality and flair—and fashion about trend, silhouette, or garment. In other words, the former "is inherent."

In addition to working on shoots and covering fashion shows, Nikki has emerged as a video star on YouTube, Snapchat, and Instagram, the latter giving her a platform that's only become increasingly important in recent months.

Navigating life as an industry influencer has always felt like a push-and-pull in regards to how much to reveal ("I'll never be the sort of person to live my entire life on social"), but she's cognizant of how much she can use her handle as a platform to educate and inspire conversation about diversity and representation.

Below, our conversation on personal style, stellar advice, and allyship.

Throughout much of your career you've worked on predominantly female teams. Can you talk about why you've found that particularly inspiring?

There's something really special about being able to go into a work environment and not needing to think about the fact that you're a woman. That doesn't discount me having to think about my race, but knowing that we're all on the same starting page as women is really special. I've never had the all-girl schooling experience, but from what I hear it's a similar thing. It takes out one factor or something that could be perceived as an issue.

GQ was a bit of a culture shock, but not necessarily in a bad way; it was illuminating to see how men can be great allies to women. And, not for nothing, there's a fairly large contingency of women at GQ and a lot of them are in top-level positions. Our editor-in-chief's number two is a woman, our director of entertainment is a woman, our head of communication is a women. That was all comforting to see.

You are exceptionally close to your sister Lola, a journalist and TV commentator, who seems like a combination of best friend and mentor. What is some of the best advice she's given you?

It's a very Mr. Miyagi, Karate Kid relationship I have with her. I moved to New York and didn't have a job, so I'd run her errands, help with her scheduling—and then get to sleep on her couch for free. When I first started working she'd edit my stuff; I'd go to CNN and watch her on TV so I got to media train just by watching her. I was really fortunate to not have to go out of my way to develop this mentor relationship because it was built-in. We've had very different careers and experiences, so while she can give me the fundamental "stand up for yourself, negotiate" type of advice, having other mentors in my life who have worked in the fashion industry has been extremely helpful as well.

The best piece of advice I've received, ever, was actually from my mom. It was sort of a charge she'd make me repeat before I left the house to go to other people's homes. She'd say I was an ambassador for the Ogunnaike family and what I do reflects on the rest of the family. I've always carried that with me, and the idea of being an ambassador for our family or a community has sort of guided my steps in my career and how I treat people. It's not "Don't go out and embarrass me," but that you should keep in mind that you're a reflection of your family and behave as such.

An element of your career requires a presence on social media. How do you balance that, knowing it's an important tool for connecting with people but not getting too wrapped up in it?

I'm not the kind of person who could ever be a proper influencer; I'm not willing to share my entire life. I attempted to be the person who gets out there and takes photos of my outfit every single day, but I stopped because I didn't like having to think about what I was going to put on for someone else's gaze. I listened to what I actually enjoyed doing on social and continued with that. I know how I can get more followers, but I don't want to participate in that game. There's definitely a blueprint and that's why a lot of Instagram and top influencers look the same.

I don't want to waste my time if we're not going to use these platforms to have interesting conversations either—and interesting doesn't have to mean political or fired-up conversations. If we're going to do the same old thing, I don't want to be a part of it. I'm considering what I'm putting out into the world too. I never want to feel like I'm polluting the internet with unnecessary things.

Have you seen a change in your own followers in the past few months as lists of Black influencers have been circulated? How has it felt to have this expanded platform?

Speaking for myself, my content during this wave of the Black Lives Matter movement is no different than my content seven years or two years ago when we were having these exact same conversations. I'm happy that more people are following me and seeing what I'm talking about, but I don't need those followers if they're not going to engage with me holistically. I'm happy to have and will continue to have these conversations as a Black female editor, but you're also going to see a lot of photos of my nephew and my sister, and I hope that people see value in that sort of content as well. You don't have to follow me or Black influencers in this moment just to absolve something.

Your current role at GQ seems to capture the idea that style, not fashion, is what really matters. How would you differentiate the two?

I’ve thought about this a lot because I’ve been fortunate enough to be on set with our fashion director Mobolaji Dawodu and watch him create these amazing looks for celebrities and the magazine and never once has he been like, "If I don’t get this exact runway look my shoot will be a disaster." He's much more about getting great pieces to work with because he wants to be able to create beautiful imagery, but [understands that] style is inherent. It could be a Gucci piece or something from Salvation Army, but either way he'll make it look amazing.

That speaks to who I am as a person. What I've found interesting is personal style and the story of the people who wear it; why and how they wear it rather than needing Look 1 from the runway. "This person has to wear this head to toe or they don't know fashion." It's about being thoughtful, about what this person's life is like and how clothing fits into it.

With my personal style I'm thinking about what my day-to-day looks like, how I can feel put together but comfortable. If I'm in a meeting I want to feel like myself, confident and ready to take on whatever it is without having to worry about what I'm wearing hindering that in any way. If you look at my style in the last two or three years it's really solidified itself in jumpsuits, trousers, blouses, and a low heel or sneaker. I'm trying to be more considerate about what I'm buying and how it fits into my overall lifestyle.

You worked alongside a lot of amazing Black fashion editors—Tiffany Reid, Chrissy Rutherford, Danielle and Gabby Prescod, Shiona Turini, Rajini Jacques. Can you share a bit about what it felt like to be a part of that sorority, especially if it was something you never saw as a junior in the industry?

In the first few seasons that I went from New York Fashion Week to Paris it was always top of mind because you saw so much diversity in New York, but then you'd go to Paris and once again kind of feel like you were on your own. There was this beautiful moment in one season when Gabby, Danielle, Tiffany, and I were all standing on the street having our photo taken together. There's something generally flattering about having your photo taken, but the fact that I was out there with my friends, girls who look like me, was a wonderful moment.

There's something special about being part of a sorority within a sorority, to be a Black editor with all these amazing Black women around me and to have supportive white female allies too. I've been on the receiving end of some not-so-great moments, and having Black women who are acutely aware of what you’re going through, who you don't have to explain things to, is special. In the same way I don’t have to walk into an all-female space and say I’m a woman, there are just things you don’t have to explain.

Everyone has a version of a story like Tiffany's. [Editor's note: Tiffany Reid, the fashion director at Bustle, recently penned an op-ed about her experience with racism at Paris Fashion Week.] I’ve consistently been followed around in stores, that’s not new to me. You can do all the things you're supposed to do as a Black person, you can be well dressed in designer things, but at the end of the day your skin is still something people are perfectly fine using to discriminate against you. When we talk about white privilege, the idea of being in a store and knowing that if you're followed it's not just because of your skin color is a form of privilege.

We are committed to educating ourselves on racial injustice as a team and helping our community do the same. Your Instagram has been a wealth of thoughts and resources—if there's one key takeaway you hope white women who want to be good allies hear, what is it?

Allyship is and should be a lifelong endeavor, so everyone can read the books and learn and realize things now, but I want people to think of it as a lifelong marathon. It’s not a sprint to affect proper change, we have to constantly be doing this, be vigilant about this. We’ve got to keep it going. And that’s okay, right? Everyone should be eager to learn and question things and want to evolve. Evolution is good.

I think we’re just getting started. Civil rights activists boycotted the Montgomery, Alabama bus system for more than 300 days. Right now we're at about day 90 in this wave of the moment, so I'm not necessarily optimistic, but I’m eager to see how it keeps going. Check back in with me in six months I can tell you how I’m really feeling, if I’m optimistic for the future.

Ever evolving, growing. She’s willing to get in there and really do the hard work to affect change.

Shop The Demi in Ivory HERE.